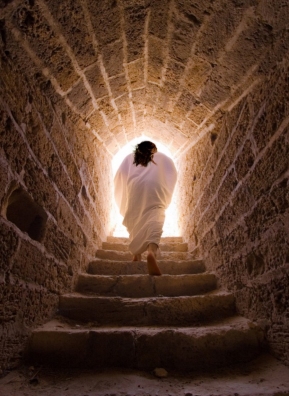 Is this a great story or what?  Hallelujah!  His Story is the greatest story ever told!

1.) Let us not forget that this message of hope we believe in is not just any story.  It is not some great invention of the mind or some fanciful tale as some so foolishly assume.  It is actual history, written down meticulously by able witnesses throughout the ages. Jesus was indeed a man of history firmly established by ancient historical manuscripts and  written about by eyewitnesses of his life.  2.) Jesus had a mission to save mankind according to His own words and actions 3.) and in doing so He fulfilled over 300 precise detailed prophecies that proved Him alone as the Messiah—that chosen and anointed one promised by God who would save every sinner who called upon His name from the wrath to come.  4.) This is His story, Our Creator God, who came down to earth wrapped in human flesh and demonstrated perfect righteousness and loved us like no other.  Hear it, receive it, respond to it; for this is the greatest story ever told!

On the first day of the week (Sunday) the women (Mark 16:1 says they were Mary Magdalene, Mary, the mother of James, and Salome. In his gospel [Luke 24:9] Luke later adds Joanna “and others”.) and not the men went to the tomb and found it empty.  As a mater of fact, when the women told the men (disciples) that the tomb was empty they thought they were full of nonsense.  “Peter; however, got up and ran to the tomb.”  He proves that while most men are negative, faithless and think that they are smarter than their overemotional counterparts, some men are actually smart enough to know that a women is worth listening to—yet Peter,like most men, tried to ascertain (without faith) just what had happened in the natural. How is it that Peter (and the others) did not stop to think about what Jesus had said about  laying down His own  life and then picking it up again (John 10:17-18)?  Had they also      already forgotten that Jesus had raised Lazarus from the dead…why wouldn’t Peter stop and think that Jesus could raise Himself?

Later, that day two of those men (one was Cleopas v. 18 and another person not of the eleven v.33) were walking to a village called Emmaus and (Jesus, unrecognized by them) appeared to them and spoke with them about the events of His death and Resurrection using scripture.  They still did not recognize Jesus until He prayed and gave thanks for the bread How was it that Cleopas and his companion didn’t recognize Jesus when He was right in their midst and even speaking with them?  When was the last time that they saw Him?  Some say that Jesus must have looked different somehow after His resurrection, but I think their minds simply refused to believe that anyone could have triumphed over such a ghastly and humiliating death.

We doubt God when we practice fear instead of faith.

When we look at our obstacles instead of God’s possibilities.  When we cease to praise and to pray to a holy God we succumb to a life of limits and doubt.  When we fail to live by faith we become simple minded.  We call wrong things right and right things wrong.  We fret and worry and become blind to reason when we drift away from God.  Like Peter and the eleven, like Cleopas and his companion—we become thoughtless without faith in Jesus.

Cleopas and his companion met up with the eleven disciples and they shared how they had likely been with Jesus, and now Simon/ Peter had seen Him too (v.34)!  Notice how they     became more clear thinking as they fellowshipped together and bolstered their hope and their faith was rekindled?  That’s the Church at work friends!  See how we need the church? As they excitedly shared with one another, Jesus Himself stood among them and said “Peace be with you.” They were startled and frightend until “He opened their minds to scripture.”  And so we also need God’s word to open our minds, build faith and bring peace.

Consequently, faith comes from hearing the message, and the message is heard through the word about Christ. Romans 10:17  The Peace of Christ can only come when we are open to His Story—that is to be open to His word.  Believing and responding to His story makes us His own and brings salvation.

Have you responded to Jesus’ Story, the gospel of Christ?  As you draw close to Him and His word He will draw close to you and bring you peace and salvation.  Then you too will become a witness of His story because that story will become yours.  He will fill you with power from His Holy Spirit (Acts 1:8, John 14:16-18) and you will both be a disciple and make them as well.

When we receive this powerful and living story into our lives, the God who wrote it wakes our dead soul and ignites life in us.  Life, purpose, hope, power and passion.  All things are possible (Philippians 4:13) in Christ and His perfect love casts out all fear. The same power that rose Jesus from the grave, The same power that commands the dead to wake— lives in us!  The same power that moves mountains when He speaks. The same power that can calm a raging sea Lives in us.  His story becomes our story—a never ending story. Let Him live in you!