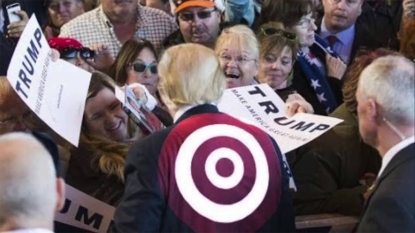 ton has a lot of names for people who don’t see things her way and some pretty evil ways of taking people out who threaten her plans for “global domination”.  When Bill was hideously horny in the White house, Hillary viciously attacked his victims and sought to drive them away in disgrace.  When complaining Ambassador, Chris Stevens, consistently requested help in Benghazi during a busy 2nd term campaign for Barrack Obama, she ordered (or upheld an order from the president) to “stand down” on a military rescue. Those four Americans gruesomely perished. Later, when being questioned on the details of the tragedy she and president Obama blamed the attack on a crummy little video. Later, she angrily rolled her eyes and shouted “what difference does it make” in a national court of law.  When Patricia Smith, mother of Benghazi victim Sean Smith, told the truth about the secretary of State’s lie to her about what happened, Hillary simply called her a liar.  Hard to believe Hillary now that she has been verified by the FBI as a blatant liar herself, but nonetheless, she’s an artful dodger to be sure, since there will be no prosecution for her on the thousands of classified documents she compromised or on the Benghazi cover up.  Now Wikileaks has more information on Hillary that reveals what she really thinks about Bernie Sanders and the Left.  “A bucket of losers” to go with “trickle down” Trump’s “basket of deplorables.”

Now Donald Trump has a target on his back and Hillary’s gang is shooting.  Granted, he painted it on himself like an adolescent jock in a locker room prank, but the bullets are flying. The latest video release clearly shows Trump to be a sexist pig-buffoon with a bad case of potty mouth.  It is inexcusable, except for the fact that we have Hillary Clinton on the other side of the coin.  A woman, who has seriously compromised national security, cost Americans their lives for her convenience and paved the way to pay out our tax dollars for the abortion of millions of children for the sake of other women’s convenience. She has made herself a millionaire by politicking with foreign diplomats through a non-profit foundation that has totally profited her.  I don’t know what we might hear or read if we could actually get access to the 30,000 e-mails or the five Blackberry phones that Hillary had her loyalists destroy.  We might hear or see some pretty racist, sexist, or even lewd remarks.  I suspect that there would be a whole lot more.  In fact, what we can clearly see is that there are a lot of people covering up for her.  That makes her more dangerous to America than the billionaire buffoon with a bad case of potty mouth.  At the end of the day, on November 8, the American people will have elected one of these two very flawed people to lead our country.  God help America!