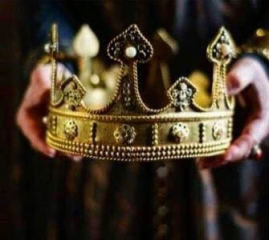 In light of the fact that we are no longer under the law but under the grace of Jesus Christ, Paul rhetorically asks:  “Why, then, was the law even given at all?” Paul then explains that the law that was given through angels, entrusted to Moses and carried out by priests (mediators: the go-betweens in a conflict), was made to be a prison of sorts to hold back man’s eternal death sentence (because of his sin) until Christ would come with the key to the believers freedom.  Now that faith in Christ has come, we are no longer under a “guardian.”  We no longer need a prison guard…we are no longer locked up under the law.  Jesus, “the seed” of  Abraham’s promise came to bring freedom to the captives:

But scripture has locked up everything under the control of sin, so that what was promised, being given through faith in Jesus Christ, might be given to those who believe. Galatians 3:22

Before Jesus came to earth, paid the price for sin and resurrected, believers in God’s promise were temporarily forgiven through faith in the coming Christ and held until the day of their redemption when Christ paid their debts in full.  Now that Jesus has come, believers in Christ are forgiven by faith in the risen Savior.   We are free and released from the custody of the law. There is no need to return to that prison.  Freedom has come and we are friends of Christ!

Galatians 3:26-28, John 17:20-23   If we belong to Christ then we too are part of Abraham’s seed.  We are children of Abraham and Children of God.  We are One!  Jesus’ plan laid out in His garden prayer clearly illustrates the fullness of his mission.  From the   beginning…we were created to be God’s friend — never His slave.

Paul calls all believers in Christ “Heirs according to the promise” (Gal. 3:29).

heir  /er/ noun  a person legally entitled to the property or rank of another on that person’s death. “his eldest son and heir”  synonyms: successor, next in line, inheritor, beneficiary, legatee.

Paul explains the Roman cultural law in regards to an heir who is underage.  He explains that although he legally owns the whole estate, the underage heir must answer to a guardian until the time set by his father.  That guardian would likely have been a slave.  Since the heir was placed in safe guard under a slave the heir seemed no different (except for the promise). Paul illustrates God’s promise to Abraham (and his “seed”—those who would     believe in Christ) as the underage heir, held under the slave guardianship of the Old Testament law until Jesus was revealed and believers were adopted as sons through his work on the cross.

Upon believing in Christ on faith we become God’s sons (children) and he immediately puts the Spirit of His Son, Jesus into our hearts that we might also cry out “Abba(lit. Greek: Daddy) Father”. At that moment, we are no longer a slave, but God’s child, and therefore also an heir to all that belongs to Him! (Romans 8:14-17)  We become children of the promise (every promise that God has made is now ours) and “No matter how many promises God has made, they are “Yes” in Christ! (2 Corinthians 1:20-22)  In other words, these promises belong to us who are believers in Jesus, and God put His Spirit in our heart as our guarantee of those promises.

Are you exhilarated to be a child of God?  What an amazing gift to inherit all that belongs to God almighty simply because of our faith in Christ!  One day, according to the scriptures, crowns may actually be rewarded to us who serve Jesus on this earth. (James 1:12; 1 Peter 5:4; Revelation 3:11)  How can that be when it is He who has actually done all the work?  It is because He is a most gracious God and He delights in honoring his children.  Oh, to receive that crown of glory that tells me “well done, my son”, and oh, what joy to cast it down in worship before His throne upon that glassy sea to cry: “Holy, Holy, Holy”, I am here solely because of you!