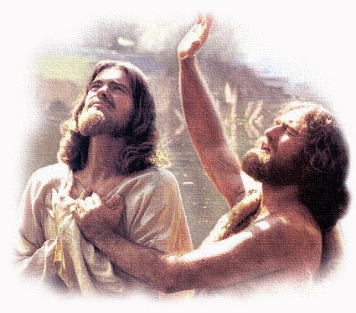 Mark begins his “gospel” (lit. Greek = “good news”)  by calling Jesus both “Messiah” and “Son of God”. (“Messiah” is the Hebrew word for Anointed One and “Christ” is the Greek word meaning the same). Mark also identifies Jesus as “Lord” and “God” in quoting the prophet Isaiah (Isaiah 40:3-5).  With this quote Mark also implies that John the    Baptist is the “voice of one calling in the wilderness” that reveals “the glory of the Lord” which “all people see together”. Likely the passage in Isaiah actually instructed John in what to say as he came down the mountain out of the wilderness and preached repentance to the people (see Isaiah 40:6-11). Mark also quotes the prophet Malachi: “I will send my messenger, who will prepare the way before me”.  He therefore identifies Jesus as “the messenger of the (new) covenant who will come to his temple” described in this same verse (Malachi 3:1).

It had been 400 years since God had spoken to His people through a prophet when John came out of the wilderness!  “Good news” had been born into the world (Jesus) but John was sent to make it public. John’s introduction of this “good news” began with the words “Repent!” and without repentance no “good news” can exist for the sinner still.  For one to turn to Christ he must turn his back to the devil.  Repentance is sadly omitted in much preaching today in an effort to make the gospel more palatable (“seeker friendly”). The gospel is sometimes presented as though you can simply add the work of Jesus to your life as though you were just adding another ingredient.  Oil and water do not mix nor do the light of Christ and the darkness of this world view.  John proclaimed:”Produce fruit in keeping with repentance…every tree that does not produce good fruit will be cut down and thrown into the fire. ” Matthew 3:8-10

To “repent” means to “change one’s mind.” The Bible also tells us that true repentance will result in a change of actions (Acts 26:20b).  We are called to be separated from this world and set aside for God.  John exemplifies “separation” in a very dramatic way. Now we are not all called to wear a hairy garment, nor are we required to live in the desert and eat locusts and wild honey, but we are all called to “repent” and to be a unique people, to be distinct from the world. John knew how to stand alone, something we must all learn to do as we follow Christ. We must be ready to strip off our way of thinking to put on Jesus. The Apostle Peter proclaimed this truth in the book of Acts and then added that we would receive the gift of the Spirit when we did so (Acts 2:38). It is the Spirit that will help us in our weaknesses (Romans 8:26), but we must desire to repent.

To demonstrate how to begin this “good news” Jesus himself was baptized by John. The act of baptism symbolizes death to our past (as we go under the water) and resurrection (as we come up out of the water) into our new life in the Spirit (Romans 6:3-7).  Jesus, of course had no sin to strip off; however, he did strip off his earthly will in order to complete his mission of the cross. He would constantly need to submit to the Father’s will to carry out that plan (Luke 22:41-43).  At the moment of his baptism the Spirit descended on Jesus in the form of a dove and God spoke His approval to Jesus that was heard by those gathered on the water’s edge. (The Trinity is revealed here).

No sooner was Jesus dried off from his baptism than the Spirit sent Him into the wilderness to fast and pray for the three year mission that He began that day.  The gospel of Matthew tells us that for these forty days Satan tempted Christ to 1.) break His fast by turning stone to bread, 2.) to throw Himself down from the Temple to prove that angels would catch Him and to 3.) bow down and worship Satan so that He might receive all the treasures of the world (Matthew 4:1-11).  Jesus prevailed over the temptations of the Devil not only by using scripture but by prayer and fasting (let us not forget that this is what He was doing there in the wilderness in order to ready Himself for God’s call). These temptations are the same ones Satan used to prevail against Adam and Eve in the Garden (Genesis 3:6) and the same ones that the Apostle John warns us about in 1 John 3:16: The lust of the flesh (our appetites), The lust of the eyes and the boastful pride of life.  Matthew also tells us that “angels attended Jesus” but only after His resistance sent the Devil away.  Meanwhile, Mark matter-of-factly sates that John The Baptist was put into prison! He was later beheaded there by king Herod (Matthew 14:1-12).

Yes, “Good News” begins as we change our minds and follow God’s calling but we must know this: We will not move in God’s direction without a fight (Ephesians 6:12). Expect it!   We will be tempted by the Devil and He will want us dead, but Jesus said: “the one who is in you is greater than the one who is in the world (1 John 4:4) in His reference to the Holy Spirit who “helps us in all of our weaknesses”.  Our fight is sure but our victory is promised: But thanks be to God! He gives us the victory through our Lord Jesus Christ. 1 Corinthians 15:57

For John who had finished his calling the “victory” was in going home to be with the Lord. This is the ultimate victory for all believers once we have successfully lived out the calling of God in our lives as well.

Follow Jesus and fight the Devil with prayer, fasting and scripture.  Beware of his three temptations…resist him and he will flee (James 4:7)! Stay faithful to God in all circumstances and believe in His promises: Romans 8:28

Just as Jesus walked along the Sea Of Galilee and called out “Come and follow me” to Simon (Peter), his brother Andrew and later James and his brother John, so He calls us too.  He calls us into the spiritual adventure of knowing Him.  He calls us out of sin and death and into his kingdom and into His kingdom work too.  We are not to be about living for the things of this world.  We are not to merely be fishermen, but fishers of men.  We are called out to by God to be new and to reconcile others to Him too.  “At once” They left their nets, their father, and all they knew to follow Jesus and the “Good News” He offered.  They stripped off the old and put on the new…                how about you?