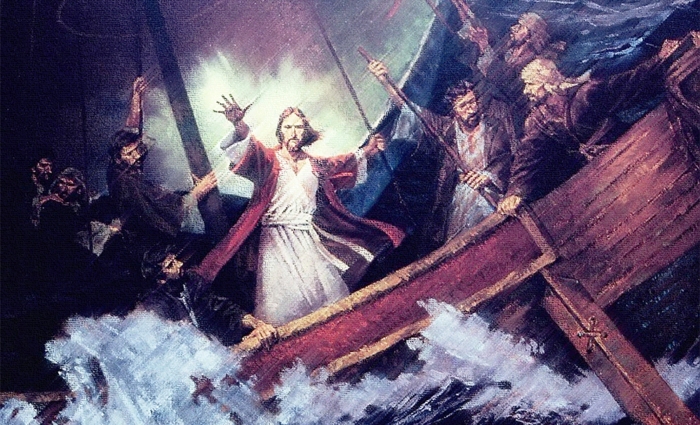 The Gathering Church/ Pastor Barry: Gospel of Mark: Memoirs of the naked runner

The Sea of Galilee, what we would call a large lake, is nearly 700 feet below sea level and its location makes it subject to sudden and violent storms as the wind comes over the eastern mountains and drops suddenly onto the water. The passage says that Jesus said to his disciples: “Let us go over to the other side.”  The question might be “didn’t Jesus know that a storm was coming?” After all God knows everything, right?  Then Jesus went to sleep!  The disciples woke him in a panic as the storm was rocking their world. “Teacher, don’t you care if we drown?”

Perhaps you are in a storm today and are wondering the same thing. “Doesn’t Jesus know I am in this storm…doesn’t he care if I drown?” His answer is the same for us today: “Why are you so afraid? Do you still have no faith?”  It was not a crass answer but a loving one that was to make them think. The disciples had witnessed Jesus doing all kinds of miracles and had   followed him because they knew that he was the Messiah, the anointed one of God, but now suddenly they disbelieved.  Believers do the same thing today.  Our faith is sure until we are tested by something that rouses our emotions. In such testing our faith should not fall apart but be bolstered all the more.  Fear and faith alike both spread,  one like a destructive cancer and the other like the cure.

The main point for us to recognize here is that Jesus was in the boat!  This same Jesus is also with us in our storm. The apostle Paul reminded us that God has said: “Never will I leave you; never will I forsake you” (Hebrews 13:5).  Jesus made this point clear to the disciples in the fourteenth chapter of John.  We may not see him in our storm but he is there none the less and he has taken great care that we do not drown.

We all want to see a miracle in our circumstances but the greatest miracle has already been done for we who believe.  Jesus has made every believer indestructible to the power of sin and death by his sacrifice on the cross.  Our resurrection is imminent!   He signed our release from sin and our admittance into heaven with his own blood. See how much he cares?

Any miracle that Jesus did while he walked the earth was only temporary and performed in order that people would know that he was Messiah.  Any miracle that his apostles did was also temporary and performed to demonstrate the power of Christ.  Any miracle witnessed today is likewise a temporary display of Jesus power, but we must never forget that we are to live by faith and not by sight (2 Corinthians 5:7). The “temporary” is simply used (and only upon occasion both then and now) to point others to the permanent and eternal thing that Jesus has already accomplished for those who believe. No “storm” can therefore separate us from the love of Christ so don’t be afraid, but believe (Romans 8:35-39).

Once the boat arrived on the other side of the lake Mark and Luke say that Jesus and the disciples found themselves in the region of the Gerasenes (Luke 8:26-39) met by a demon possessed man, while Matthew’s account (Matthew 8:28-34) calls it the region of the Gadarenes where they were met by two demon possessed men—both are correct from their perspectives.  Mark and Luke are writing to Gentiles and Matthew was writing to Jews.  The names were variants of the actual place which was called Gadara at modern Umm Qais in northern Jordan. Matthew recalls two men where Mark and Luke recall only the vocal one who later requested to leave with Jesus.

What is important to note here is that the demons (there were many in the man: “Legion”) knew exactly who Jesus was (as did the winds previously) and begged him not to “torture” them by making them leave the one(s) they possessed. Jesus appears to grant the request of the demons by allowing them to go into the pigs, but on closer inspection he sends the pigs to run off the cliff and into the water where they drown. This left the demons with no place to go but to the abyss (Luke 8:31- a place of torment).

A more noteworthy observation is how the people of the town respond to Jesus.  They do not open there hearts to him in faith, instead they beg him to leave so that they can continue with their disbelief.  They were as lost as the demons.  In essence, they too cried “what do you want with me?”  Jesus answered them by leaving .  We must want faith to have it. Only those who call upon Jesus’ name will be saved. The freed man was left behind to continue that offer.

In contrast to the hard-hearted people of Gadara we see the earnest pleas of faith from Jairus (a synagogue leader: Luke 9:41) for the healing of his daughter and the woman with an issue of blood. Both seek after Christ in faith and are rewarded for their persistence.  Jesus was physically touched by the woman and emotionally touched by the man’s love for his daughter in the same way as he was by the persistence of the paralyzed man who was lowered through a roof by his friends (Mark 2:5). Jesus admires persistence in faith as is reflected in his parable of the Persistent Widow (Luke 18:1-8), “but when he comes will he find faith on the earth?”  Will you touch Jesus through your persistent faith or will you give way to fear?

At the end of chapter five the dead girl stood up and “they were greatly astonished!” We have also read that “they” were terrified when the winds obeyed Jesus (Mark 4:41) and they were amazed when the demons fled (Mark 5:20b), but did these things birth faith in their hearts? Jesus went to his hometown and once again people were amazed but they didn’t have faith so he did hardly any miracles there.  He was untouched by their response and “amazed at their lack of faith”. In our storms… Why are we so afraid? Do we still have no faith?  Child of God listen to that still small voice grow louder…”Be still and know that He is God”.